← back to
BLIGHT. Records
Get fresh music recommendations delivered to your inbox every Friday. 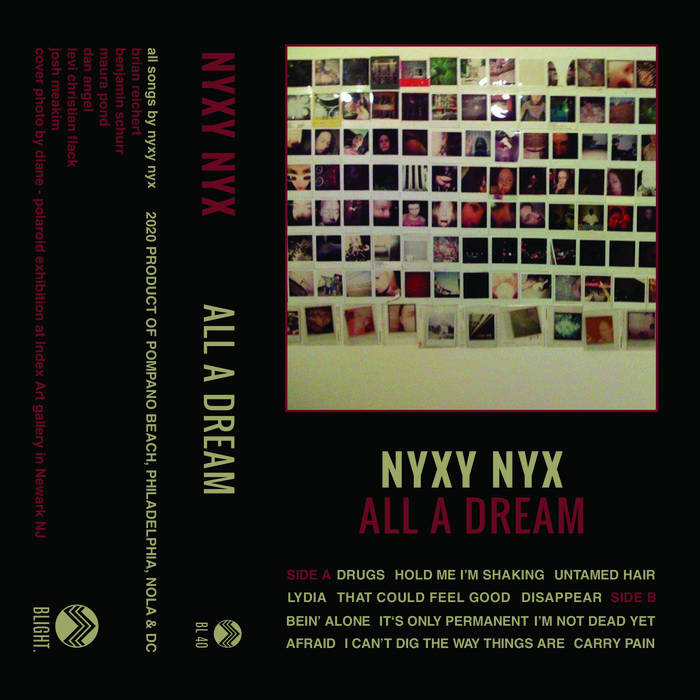 "Awoke from a short end of a long dream in a place in which a bus aisle transitioned into apartments separated by a hallway, then culminated in the last minute of footage as a small neighborhood road without lanes dividing ranch apartments in the nook of a vast low swell hilled treeless area of fine green grass. Not likely naturebood, namely naburehood. The cross neighbors roommates friends were partying, but it was only made to be overly apparently public when she left. She was going off to a job of stature, some board member. I was collecting odds and ends scattered in the hedge cutout just in front of the porch which was only a few feet from the lane. "what are you doing here?" Someone was next to me, and helped explain. I got up and saw people inside standing around drinking playing music, before the door closed. When I walked down the lane a few doors on the same side, another apartment opened and people began to move themselves over to the party happening there from where it was choreographed to get louder and more in your face when the lady left for work. The dream ended on commentary in the middle of the road, as I headed out of the neighborhood, towards the city. "There's reports that can show more success of non musicians who employ techniques of strategy for building up a techno based album, without any basic knowledge of it, to begin with, that are rivaling established and more tenured "real" musicians. It ended abruptly on a close up screen view of Todd Rundgrens latest album's featured song, as a key example; suggesting that he had conditioned the audience to go full-weird in his late career, which, isn't really weird at all, its just musical techniques that most people can pull off with some understanding. Ofcourse, it sounds weird. All composed of even spaced tempos comprising a rhythm of collected samples of other musicians of the same melody, played with a rising waver on the end from a keyboard's slider button. wahrwouwing!, at the end of each. The last part was a different cluster of same song endings over pop rock history, ending with a keyboard finger press at three octaves higher in the major scale. The Todd Rundgren ending of the dream was irritating and that's what woke me up." - HK

Bandcamp Daily  your guide to the world of Bandcamp